or view all Saved Files 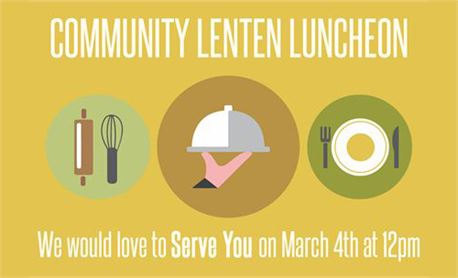 In your first two months, you are limited to 100 premium files per month.To lift this restriction now, upgrade to an annual membership.The $199 annual charge will be pro-rated based on your current monthly start date.
Upgrade Now

Please allow a few minutes for payment to be processed before downloading.
Browse Gallery

"Lenten Luncheon" is an event that typically brings together members of various churches, throughout their respective local communities, in faith and fellowship with a soup lunch, special music and a guest speaker. It’s offered weekly during Lent, which is the six-week observation for Christians leading into the death and resurrection of Jesus Christ at Easter. This file was originally designed to be used as a featured image in a Facebook Post.  Since then, I have included a Facebook Banner as Well. ZIP file includes all source material.

Icons have been exported as PNG (vector form is included as AI CS6).

Facebook Post and banner reside in a PSD. The font used is "SteelFish" and can be found at dafont.com